All athletes are required to complete the clearance process before they can participate in any team activities. Please visit www.athleticclearance.com/ and create an account in order to begin. Every athlete is also required to have an up to date physical on file. These are good for 365 days so will be required for each school year they

The volleyball team, which finished second in the De Anza League, lost in their CIF first round game to Covina HS on Tuesday by a score of 3-0. The tennis team, which actually finished tied for second place in league, also lost their opening round CIF contest to Beaumont HS on Tuesday. Both programs had 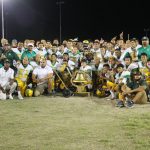 Judy Wallis, Phyllis Fain, & Aimee Fain, have long been supporters of CVHS Athletics. If you attend our contests, you will almost always see at least one of them with a camera nearby catching the action! We are having problems with our own photo galleries on this website so we wanted to include a link to