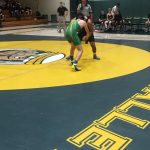 The 2016-2017 wrestling season was one of the better ones in recent history at CVHS. The team swept the competition to become De Anza League champions and six wrestlers placed in the top 5 at CIF. Destiny Salinas actually went all the way and became CIF champion in her weight class and finished ranked 8th in

All athletes are required to complete the clearance process before they can participate in any team activities. Please visit www.athleticclearance.com/ and create an account in order to begin. Every athlete is also required to have an up to date physical on file. These are good for 365 days so will be required for each school year they